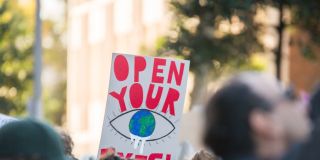 Everyone's an influencer - even if they don't know it. Before social media, the pictures of food, outfits, holiday destinations, politics, and book recommendations might have only affected those around you. Nowadays, people can influence millions of people around the world they don't even know. And if they have a big following, that affords a surprising amount of power. In what's termed the "Kate Effect '', each time Kate Middleton steps out in a new dress, it sells out in minutes.

The issue is when this 'influence' tips over into manipulation. It's important here to understand the difference, and not to patronise, it's apparently a difficult one to spot. Influence is the ability to affect someone else's behaviour because of your authority, knowledge or relationship with that person. Manipulation is the power to influence someone else to your advantage.

The two are surprisingly close cousins and can cause muddy waters. For example, recent cases have exposed many social influencers who do not disclose when they are selling or recommending a product that they have been paid to promote. Whether or not your favourite Instagram celeb knows where the line is, PR professionals definitely must.

The CIPR describes PR as “the discipline which looks after reputation, with the aim of earning understanding and support and influencing opinion and behaviour.” So influencing is integral to any PR's job, but from what we know as the difference between influencing and manipulating, that’s already dicey. It says nothing about the representation actually being true, which in some cases and for some organisations, falsehoods can certainly be advantageous.

Early this year, the FT reported that communications companies were being accused of spreading climate information on behalf of their clients. PR firms were described as “key organisational actor[s] in climate politics” and through dominant strategies to “manipulate environmental discourse” they were 1. Helping fossil fuel companies continue polluting and 2. Slowing government action by distorting climate debates.

Obviously, this puts a lot of weight on PR and how the shaping of the messages it puts out into the world can affect not only every single person in it but also the Earth itself. To put it lightly, that’s pretty daunting. So, what should we do about it?

Well, what’s clear is that the boundaries between influencer and manipulator are quite simply, not that clear. And when it comes to PR - and technology's reach - that can steer what literally billions of people are thinking today. That means taking responsibility and having a duty of care to each other. If a message is going out into the world, we must first stop to consider whether we are “influencing opinion and behaviour” as the job stipulates or if we are manipulating the facts. To me, that includes whether you are peddling the latest sell-out dress, or quite literally saving the world.

If you want to know more about the influential role PR can play in driving brand awareness and growth for your business (large or small, new or established), drop us a line.